Identical twins are associated with loner cells. If you have not read the page on loner cells, it is highly recommended that you read and understand loner cells first.

Identical twins are two cells on the Sudoku board that are known to have the same value. The actual value of the cells don't need to be known to call the numbers identical twins. 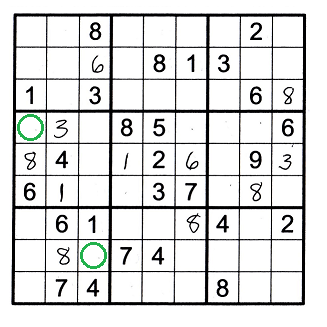 Look at boxes four and seven. The cells with the green circles in these two boxes are identical twins.

Conversely column three only has one empty cell that is outside of box four (cell r8c3).

Since cell r8c3 is the only empty cell in column three outside of box four, it must be the same value as the loner cell in box four. They are therefore identical twins.

You can sometimes determine the value of one of these cells and if you do you will know the value of both cells since they are identical twins. Observing the cell in box four you will see that it can only be a 2, 7 or 9. Observing the cell in box seven you notice that it can only be a 2, 5 or 9. Since they both must be the same value the 5 and 7 can be eliminated. The result of this exercise is that they are either a 2 or a 9.

In this example we could only narrow the value down to one of two possible values. There are times when you will be able to find the value of both cells because all but one value will be eliminated.

This video shows an example of identical twins and how their value can be found.

Watch the entire video or jump to 10:20 where a loner cell is found in box 8.

At 10:55 the loner cell's identical twin is found and you will see how their value is determined.

Identical twins can be found and used in puzzles of any level of difficulty. They are most commonly found when a puzzle is partially completed, when there are fewer remaining cells to fill in.