The Complete History of Sudoku

Who invented sudoku? Was it invented in Japan? Where did the name sudoku come from? How long has sudoku been around?

The answer to these and other questions can be found below. Learn all about sudoku's history on this page.

But the origins of this puzzle come from other parts of the world. And what we call sudoku today was also invented elsewhere.

Where it All Began

Magic Square - sudoku’s roots date back to over two thousand years BC in China. This is where it is believed ‘magic squares’ originated. A magic square is a 3 x 3 or 4 x 4 grid with numbers in the rows, columns and diagonal that all result in the same sum.

Try it. Add the numbers of any row, column or diagonal in the magic square below and the sum will be 15. 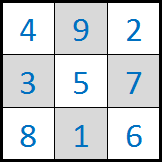 Latin Square - in the 1700s Switzerland’s Leonhard Euler, a mathematician, mused on removing the summation rule in magic squares. The result was ‘Graeco-Roman Squares’ or ‘Latin squares’ which were the next step in the evolution toward the sudoku puzzle. These squares were on a 4 x 4 grid where each cell had one of four Latin letters and one of four Greek letters. The solution was to arrange the letters so that each row and each column contained all four Latin and all four Greek letters with no duplicates.

Latin squares started to look like what we know as sudoku today.

See it. In this Latin square below no row or column has more than one of each Latin letter and one of each Greek letter. 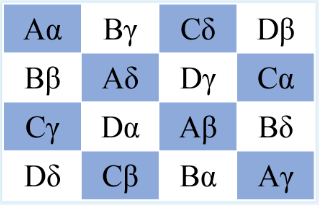 France About a Century Later

From around 1890 to 1920 French newspapers had puzzles that were like Latin squares, only altered to use numbers 1 through 9. Numbers were left off and the solver would find the missing numbers.

They were more like today’s sudoku but did not catch on.

In the 1970s American Howard Garnes created the first real sudoku puzzle in Indiana. A Latin square with an extra rule -- the numbers 1 to 9 must also be unique within the nine regions of 3 x 3 sub-squares called boxes or blocks. Adding the sub-square rule made the puzzles more challenging and more interesting. In 1979 Dell Puzzle Magazines New York published these puzzles with the name ‘Number Place.’

Sudoku Gets Popular In Japan

The Japanese have always liked puzzles, and crosswords just don't work because the Japanese written language uses characters for each word instead of letters. In 1984 the Japanese magazine Monthly Nikolist started publishing the Number Place puzzles. They were later called sudoku, an abbreviation from the longer name Suji wa dokushin ni kagiru (‘the numbers must occur once only’). This name stuck and sudoku became very popular in Japan.

Wayne Gould, a retired judge and puzzle enthusiast from Hong Kong, found a puzzle book in Tokyo in 1997. He fell in love with sudoku. He wrote a computer program, which took four years to complete, that generates sudoku puzzles. In November 2004 Wayne convinced the London Times to print them in their newspaper. About the same time the Conway Daily Sun in New Hampshire started printing sudoku puzzles.

After that sudoku started appearing in American and British newspapers and rapidly spread.

Today it is hard to go anywhere without seeing sudoku. People all over the world are discovering the puzzle and enjoying it.

Is the Name Sudoku a Trademark?

Sudoku is a registered trademark in Japan where the puzzle is generally referred to as Number Place. In the rest of the world, where it is not trademarked, the puzzles are called sudoku.