Understanding the sudoku terminology on this page will help you both on this website and in other places that discuss sudoku. A quick review of these sudoku concepts will help you understand what is meant as you run across the differnet terms.

Use this page to become familiar with the terms on this site. You can refer to it when you see a term you don't understand. It is recommended that you at least skim through the list of terms and read the ones you aren't familiar with so you recognize them when you see them.

A box is a series of nine cells organized in three mini-rows and three mini-columns within the box. The sudoku grid has 81 cells with nine overlaid boxes (three wide and three high). Boxes are numbered from the top left (box 1) to the bottom right (box 9). See container numbering below for more information. Boxes are one of the three container types. See also container.

A cell is the smallest unit in a Sudoku puzzle. A cell is a box that contains one number. There are 81 cells in a sudoku grid.

A column is a vertical series of nine adjacent cells. Each column holds the numbers 1 through 9. Every number exists in each column and no number repeats. Columns are one of the three container types. See containers.

The Sudoku grid containers are numbered to aid in illustration when explaining concepts. The three containers (see container on this page) are each numbered 1-9. The illustrations below show how each container is numbered. This should be very straightforward and easy to remember.

Rows are numbered 1 through 9 from the top row to the bottom row as shown here. 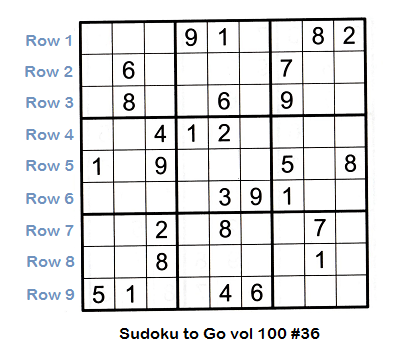 Columns are numbered 1 through 9 from the left column to the right column as shown below.

Boxes are numbered 1 through 9 from the top left to the bottom right. See below. 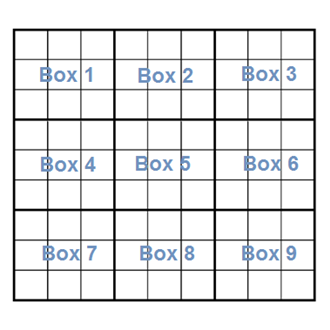 All standard sudoku puzzles start out with numbers that are already filled in by the puzzle creator. These numbers are called givens.

Sudoku puzzles have nine rows and nine columns which gives 81 total numbers. Research shows that a puzzle must have at least 17 givens. If it has less than 17 givens there will be more than one solution.

Easier puzzles generally have more givens and harder puzzles have fewer. However the skill level of a puzzle is not entirely determined by the number of givens.

What does r2c3 mean?

Sections are specified using either horizontal or vertical and a number (1, 2 or 3). Examples: the topmost section is hs1. The rightmost section is vs3.

Twin and triplet notation is similar to row/column notation. Twins are shown using the two numbers that are twins with a 't' behind them. For example 23t means twins that are 2 and 3. Note that there are two digits preceding the 't' when they are twins.

When there are three digits before the 't' a set of triplets is described. For example 345t means a container has triplets and they are the numbers 3, 4 and 5.

A pattern is a combination of filled and unfilled cells in a box. Patterns are not fundamental to solving Sudoku but they can help you solve them.

SudokuPrimer has a whole series of patterns that can help you solve puzzles. You can learn how to use each pattern.

Many sudoku puzzles start with a pattern of givens that have "rotational symmetry." This means that if you rotate the puzzle 180 degrees, givens will be in the same positions as before the puzzle was rotated. Here is an example of a puzzle that is rotationally symmetrical. 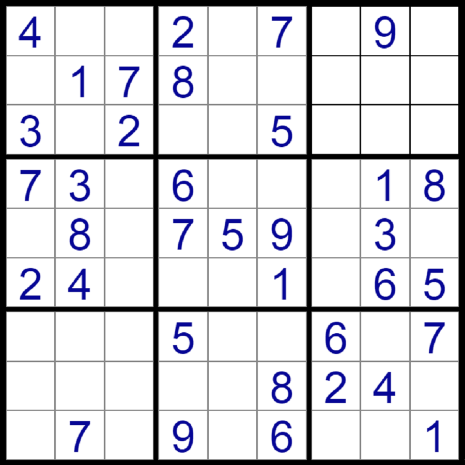 Scanning to see if a puzzle has rotational symmetry is relatively easy. Look at the single puzzle above and see if you can determine whether it is rotationally symmetrical.

From this scan we have determined that box 1 and box 9 meet the rotational symmetry "test." Now look at box 2 and compare it with box 8 by scanning it in the same way as we did box 1 and 9. If those two boxes pass the "test" check box 3 with box 7, then box 4 with box 6.

At this point you have checked all of the boxes except box 5. Box 5 is a special case. Since it is in the middle of the puzzle it doesn't have a complement box. However, the givens in it must be compared to other givens in the same box. The 6 in r4c4 indicates that another number must be in r6c6. There is a 1 in r6c6 so that passes. Continue to check all givens in box 5 to determine if it passes the "test."

Note that the 5 in r5c5 stands alone. It is in the exact middle of the puzzle and therefore doesn't have a complement. Whethere there is a number in r5c5 or not doesn't matter to us when we do the symmetry test.

If all boxes pass the test and the center box passes the test we have determined that the puzzle is rotationally symmetrical.

A row is a horizontal series of nine adjacent cells. Each row holds the numbers 1 through 9. Every number exists in each row and no number repeats. Rows are one of the three container types. See containers.

Create & print your own wordoku puzzles > >

A section is a combination of three rows or columns, and three boxes. A section is not one of the basic building blocks of a Sudoku puzzle. However sections are useful in solving them. Three boxes across or three boxes down comprise a section.

To help illustrate sections think of three boxes in a line, either horizontally or vertically. There are three horizontal sections. 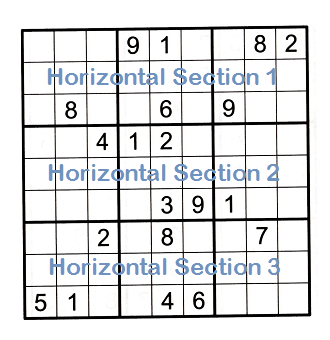 There are also three vertical sections. 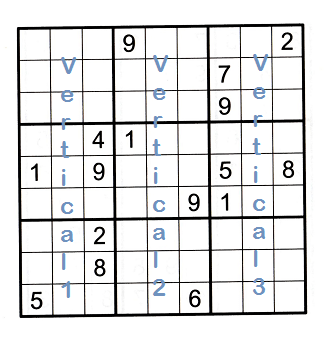 See "Solving sections" in techniques to learn how to solve them.