What's going on in the sudoku world

What's happening in the world of sudoku? Find out here. Some news stories are new, some are older; they won't necessarily be current stories. When articles are found they will be placed here with links. The newest stories added will be at the top of the page.

Check back regularly for updates.

If you have news to share or know of interesting sudoku news stories email the link to [sudokuprimer at gmail dot com].

Maki Kaji, the "godfather of sudoku," and president of Nikoli, died August 10, 2021. Here are some articles about his life.

Nikoli had an important role in sudoku history

Video of a Nikoli puzzle

For lack of a better name, this is called an observation by the user that came up with it. This user explains that all of the numbers in the dark red cells in any sudoku puzzle are the exact same numbers in the blue cells. See the sudoku grid below. 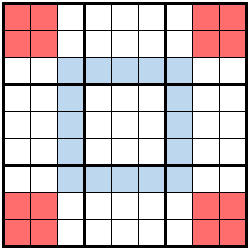 Try this: look at any completed sudoku puzzle and list all of the numbers in red cells, and you will find the same list of numbers in the blue cells. Amazing, but true: this works for any puzzle!

We can sometimes use this to help solve a puzzle. Sudoku Primer video 220 shows an example of how you can use this information to find a number.

The original location of this observation (German)

These are fun to read

The 2020 championship was held in Hyderabad, India in January

Check here for the latest Economic Times news about sudoku

Cracking the Cryptic makes the news

Article about Simon Anthony and his YouTube channel "Cracking the Cryptic"

Classic article -- when sudoku swept the globe in 2005

Read about the puzzle that spread like a virus 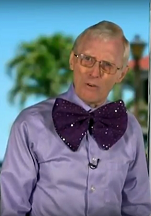