Sudoku loner cells are a little bit tricky, but when you comprehend them they will help you find numbers quickly. Loner cells can also be an identical twin. See Identical twins for more information but be sure you understand loner cells first.

Loner cells are named this way because they are "alone" or by themselves. They are the only cell in a box that is not populated that is outside of a specific row or column. See the example below. 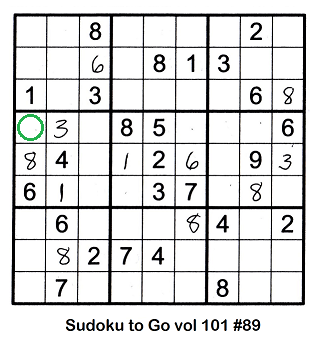 The cell with the green circle is the only cell in box 4, outside of column 3, that is not populated. It is therefore called a loner cell.

Loner cells can be found and used in puzzles of any level of difficulty. They are most commonly found when a puzzle is partially completed, when there are fewer remaining cells to fill in. They can be very useful in more difficult puzzles when they have an identical twin (see the identical twins page).

Video Example
Watch this video to see an example of loner cells and identical twins.

Be sure to go to the next technique - identical twins. They are related to loner cells and are very powerful. You want to learn about them!