Looking at three boxes at a time

Sudoku cross-hatching, or solving sections, is where you look at a single box with respect to two other boxes. You search for a specific number and see if that number will fit anywhere within the section you are looking at.

If you aren't familiar with sections review them in the glossary and learn how they are numbered. Each section is associated with three boxes and either three rows or three columns as shown in the glossary.

In the image below notice that the top horizontal section already has two 6s, one in row two (box one) and one in row three (box 2). It only needs one more 6. That means the remaining 6 goes in box 3 in row one. There is only one empty cell in that row and box, so it is easy to see that the 6 goes in that cell. 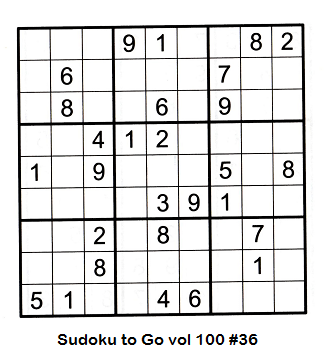 In this example an 8 is found after looking at two different sections.

Look at vertical section 3 (the rightmost section). The top box (box 3) and middle box (box 6) already have an 8. The bottom box (box 9) doesn't have an 8 yet. Therefore the 8 must fit in the leftmost column of that section, in one of the three rows.

Now look at horizontal section 3 (the bottom section). It has an 8 in each of its top and middle rows. So that means the 8 fits in the bottom row and the left column in box 9.

Sudoku cross-hatching (solving sections) is a tool that is used for all levels of difficulty. Easier puzzles will yeild many numbers using this tool. More difficult puzzles yield fewer numbers at first but as more and more numbers are found solving sections becomes more productive.