Twins are very useful even if you can't solve them. They can help find other numbers.

When two numbers can only occupy two cells (whether they are solvable or not) they are called twins. Look at this puzzle. 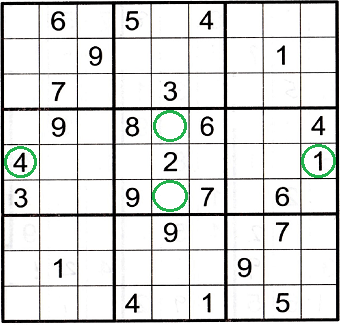 Look at row 5 and box 5. Row 5 has a 4 and a 1 outside of box 5 (circled). The 4 and 1 are constrained to the two cells with green circles in box 5. They are called twins because there are only two cells in box 5 that can fit those two numbers.

The twins can be solved because row 4 has a 4 in column 9. The top cell is therefore a 1 and the bottom cell is a 4.

Because we know that the 4 and 1 are twins in box 5, by deduction we know what the other two numbers are - they are 3 and 5. Note that the twins don't even need to be solvable for us to know what the last two empty cells are in box 5. That's a powerful concept that can lead to finding lots of numbers when twins are found!

The 3 and 5 are also solvable so the puzzle looks like this after finding all four numbers in box 5. 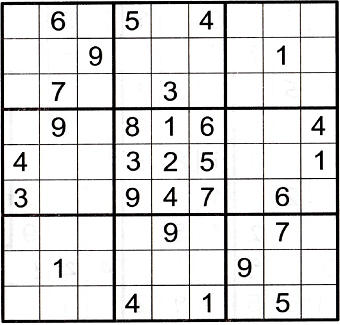 The puzzle below has eight sets of twins. See if you can see all of the twins. Mouse over the puzzle for hints (each green dot has one twin in that cell).

Mouse over the puzzle to see hints about where all of the twins are.

There is a set of twins in each box except for box 1. Box 2 has the only set of twins that can be solved without filling in more numbers to the puzzle.

Twins can be found in any skill level puzzle. They can be found and used in easy puzzles but other simpler techniques can be used instead of twins. Medium and harder puzzles can take advantage of twins.