See what a single cell sees

Solving single cells is a simple strategy for finding numbers. Look at individual cells. If a cell exists that can "see" all but one number then that cell can be filled in. 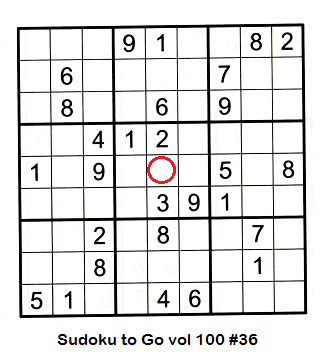 This example has all of the numbers in one row and one column. There could have been one or more numbers in box 5 (the box that contains the circled cell) that would also count as numbers that can't fit into the circled cell. For instancce, if row 5 didn't already have a 9 in it the 9 in box 5 would suffice and the circled cell would still be a 7.

This video illustrates the concept of solving cells.

This tool can be used on any puzzle level but it is most useful on easier ones. Harder puzzles have fewer givens (see glossary). So the chances aren't as likely that you will find enough numbers for a given cell. However as you start filling numbers in you will have more chances to solve individual cells.

Don't confuse this technique with solving rows or columns. Although they are similar, solving cells looks at an individual cell as opposed to an entire row or column. See "solving containers" for that technique.