Ghost numbers are empty cells in a row, column or box that are the only cells that can hold a specific digit. Ghost numbers can be used to narrow down the possible places in other rows, columns or boxes where the same digit can exist.

Ghost numbers can help you find where a specific digit goes by eliminating possible cells in other rows, columns or boxes. Look at the image below. 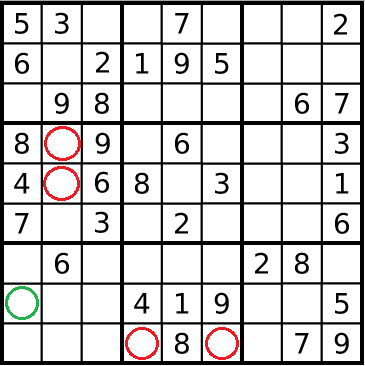 The cells that are circled red in row nine are both a possible 2 and are the only empty cells in box eight that can be a 2. They are therefore called ghost 2s. The cells that are circled red in column two are also the only possible 2s in that column. The combination of both sets of ghost 2s in this puzzle show that the 2 in box seven can only occupy the cell that is circled green.