This pattern has the potential to find lots of numbers

When you see an L pattern you will often be able to find twins and/or triplets using it. You will also find where other numbers go even if you can't solve the twins and triplets you find. Just knowing about them can help you.

The L pattern exists when there is a wall that has one populated cell adjacent to it. The wall and the adjacent cell must be in the same box. There are two L patterns, one in box 1 and one in box 3, in the figure below.

NOTE: the puzzle in the figure above is not valid - it is only used to illustrate the L pattern

Let's look at box 1 first. Notice that there is a 6 and a 7 in box 7 that can only go in column 2 in box 1. The L pattern helped identify those 67 twins in box 1. The twins can't be solved yet. But that also helps us find triplets in box 1 column 3. The triplets in column 3 are 3, 8 and 9. Although we can't solve them, because of the L pattern we were able to identify in which column every number goes in box 1.

Now look at boxes 4 and 7. The twins and triplets in box 1 will help us find numbers in these boxes too. 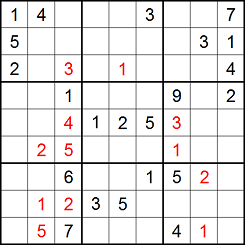 NOTE: the puzzle in the figure above is not valid - it is only used to illustrate the L pattern

Figure 2 shows all of the numbers found because there is an L pattern in box 1 (red numbers). Make sure you understand how each of these numbers were solved.

It was mentioned above that box 3 also has an L pattern. As an exercise see how many numbers you can find by looking at the L pattern in that box.

Video about the L pattern