The T pattern allows you to look at both a row and a column for potential numbers. It is found when a box has empty cells that are in the shape of a capital T.

Watch for T patterns that emerge when other numbers are solved. They can appear at be useful any time.

The T pattern is when there are four (or more) numbers in a box that line up to make a T shape with the empty cells. Here is an example puzzle with two T patterns, one in box 3 and the other in box 7. The red lines show the cells that form the Ts. 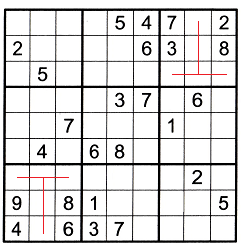 Once a T pattern is found a row and a column can be used to find numbers. In the example below several interesting things are seen.

The 5 that is circled in red in row 9 was found because of the ghost 5s in box 7.

You will also notice that there are 25 twins in box 6 because of the T pattern we found in box 3. See if you understand why.

These are all examples of the T pattern and how it can be used. Lots can be found in this puzzle because of the two T patterns.

The T pattern can usually be found in medium to hard puzzles, sometimes in expert level puzzles. They can be useful in any skill level puzzle.

Video about the T pattern