Next pattern: Plus pattern >>

The gate pattern is useful for sometimes finding numbers but you will at least know in which row or column the number goes in. If conditions are right you can solve numbers using this pattern.

The gate pattern exists when there are two cells in a box in the same row or column and the third cell in the row or column is empty. It doesn't matter where in the box the populated cells are as long as

When this condition exists you have a gate pattern. In order for the gate pattern to be useful you also need to have 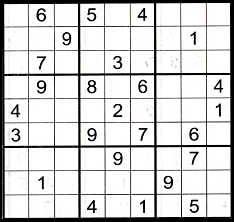 In this case there is also a 9 in column 4 which constrains the 9 in box 2 to r3c6. So in this example the gate pattern found a 9 for us!

Video about the gate pattern

Next pattern: Plus pattern >>