The corner pattern is easier to see and use than other patterns. When you see it you may be able to find twins right off. You can also find single numbers that will help you.

Because of what has been found in box 9 so far there is only one cell that isn't filled in or circled. By deduction we know that cell must be a 7.

There are more numbers that can be discovered with the other three corner patterns that haven't been discussed yet. Those are left for you to see if you can find them. Then look at figure 2.

To illustrate how numbers are found look at the puzzle in figure 2 below. The underlined numbers are numbers directly found by using the corner pattern. 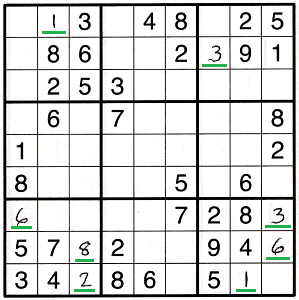 You can find the corner pattern in puzzles with any skill level but there will be more in easy to hard puzzles than in expert puzzles. Keep in mind though that as you fill in numbers in puzzles of any difficulty it's possible to create corner patterns.